For some, being advised that needing jaw surgery to correct your bite can be disheartening. At STO Orthodontists, we understand that jaw surgery is not for everyone and should generally be offered as a last resort when no other options exist. This is particularly
true when you may have no concerns about your facial structure and you simply want to improve your bite or teeth alignment. With over 25 years of experience, the team at STO Orthodontists have had great success in providing non-surgical treatment of underbites, overbites and open bites.

Am I a candidate for non-surgical orthodontics?

There are many parameters that determine whether you would be a suitable candidate for non-surgical orthodontics. At the initial consultation, your doctor will assess factors such as:

If the problem is determined to be mild or moderate in nature, non-surgical orthodontics should be possible. For cases involving severe jaw misalignment or facial asymmetry, jaw surgery may still be required. The final treatment decision will be made on an individual basis between you and our doctors at the consultation.

What are the benefits and drawbacks of choosing non-surgery instead of surgery?

While non-surgical orthodontics will be able to straighten your teeth and improve the bite, your facial profile and esthetics will remain mostly unchanged.
Any pre-existing facial asymmetry, such as chin or nose deviations, cannot be corrected without surgical intervention. There are also biological limitations for certain tooth movements that might dictate aiming for significant improvement rather complete bite correction. A surgical treatment plan will include significant additional costs and risks that would be addressed by the surgeon.

The treatment cost and time varies based on specific factors for each individual. Treatment time typically ranges from 20 to 32 months and is dependent on case difficulty, need for extractions or appliances as well as using braces or aligners. In almost all cases, non-surgical orthodontic treatment is less costly than combining orthodontics with jaw surgery.

This case features a 12-year-old female with chief concern being her large underbite; the family declined to have jaw surgery. The underbite was treated by strategically moving the upper teeth forward and retracting the lower teeth back using the spaces available. This combined movement, in addition to bite pads and rubber bands, allowed for a complete correction of the underbite.

This case features a 15-year-old female who came to our office looking to improve her smile. Surgery was recommended as the patient had a smaller upper jaw and a larger lower jaw. However, the family declined surgery and wished to have the best possible result without surgery. The underbite was treated with removal of 2 upper second molars and 2 lower first molars. This combined movement, in addition to rubber bands, allowed for a complete correction of her underbite.

Clinically, underbites may appear as:

What are some ways we can treat underbites without Jaw Surgery?

The two main methods for treating underbites without jaw surgery are: 1) early intervention during childhood; 2) orthodontic camouflage after, or near, the end of pubertal
growth.

For many children with underbites, early orthodontic treatment (at approximately 7 to 9 years old) will be beneficial and improve the prognosis of future treatment during adolescence. The aim of early intervention is to reposition the jaws to eliminate or reduce the need for future jaw surgery. The three main treatment strategies for early treatment are the reverse-pull night gear appliance, bite pads and rubber bands. The doctors at STO Orthodontists will create a customized treatment plan that may involve one, two or all three of these methods for your child.

For adolescents or adults, underbites may be treated without surgery if the severity of the jaw discrepancy is mild or moderate in nature. The correction of
the underbite is achieved by moving the teeth in a specific way to “camouflage” or compensate for the underlying jaw disharmony. This could involve a combination of moving the upper teeth forward, pulling the lower teeth backwards or changing the rotational
orientation of the biting surface. As always, the goal of non-surgical underbite correction is to create a harmonious result that reflects what already exists in nature. In some cases, removal of teeth or rubber bands may be necessary to produce the desired
tooth movements. The specific strategies employed will be customized in the treatment plan designed by our doctors after the examination.

For a more detailed review of Non-Surgical Class III treatment at STO Orthodontists, please see the video to a lecture that Dr. Mair presented at the Annual Session of the American Association of Orthodontists in May 2016

This case features a 16-year-old male who sought treatment at STO Orthodontists after being previously informed that jaw surgery was the only way to correct his open bite. Using temporary miniature implants combined with extraction of the upper second molars, the open bite was successfully closed by intrusion of the upper molars and premolars. The overall treatment time was just 23 months using traditional braces.

This 53-year-old female patient came to our clinic with chief concerns of spacing and protrusion of her front teeth. She is missing several back teeth and had significant amount
of spacing between her front teeth and throughout her lower arch. The spacing, protrusion and open bite were simultaneously corrected in 25 months using clear aligners (Invisalign®) that were strategically designed by the doctors at STO Orthodontists. The spaces in the back were maintained for future replacement with prosthetic teeth. 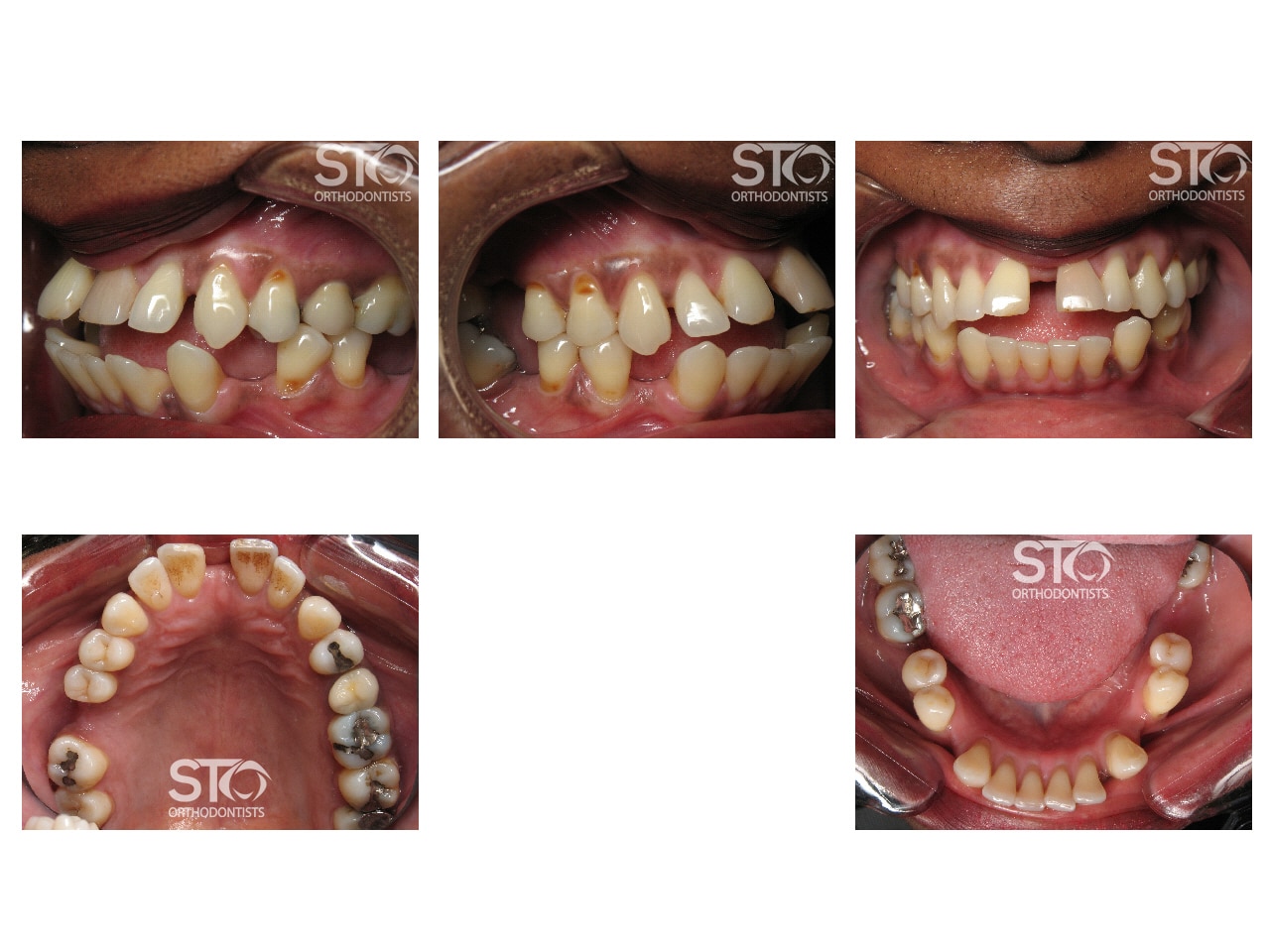 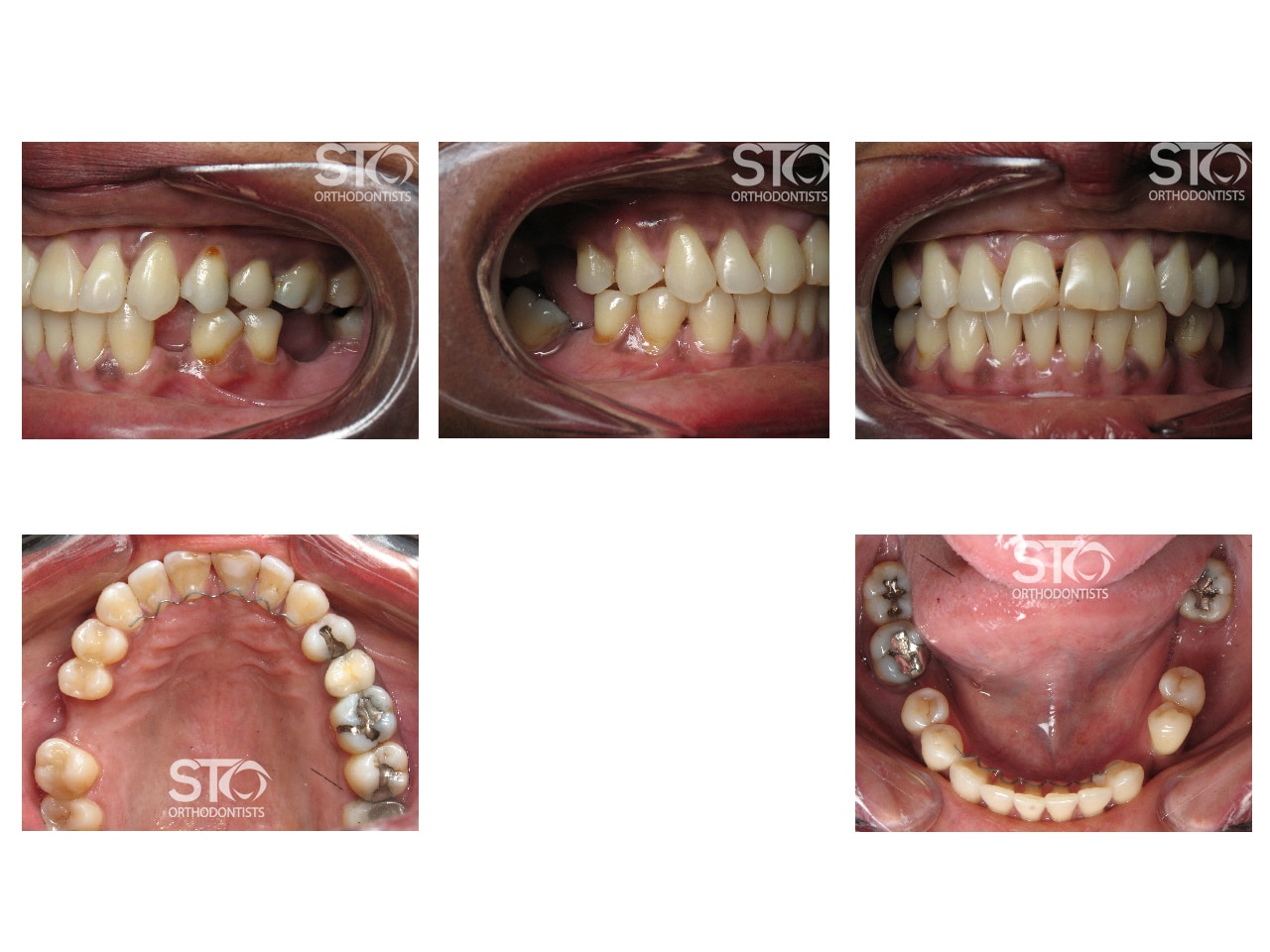 What are open bites?

Open bites occur when the upper and lower teeth are not in contact with each other with jaw closure and the teeth are not overlapping vertically. The cause of open bites may be due to various different factors, such as:

What are some ways we can treat open bites without jaw surgery?

The key to success in treating open bites is identifying and addressing the root cause of the problem. This concept is also important for long-term retention of open bites.
For example, people with persisting finger habits after treatment may see their open bite return if the habit is not eliminated.

1) Children with finger or tongue habits

Although it is natural for most children to have a finger sucking habit during infancy and early childhood, the majority will stop the habit on their own with age. However, some children have persisting finger sucking habits that may require intervention. To avoid negative dental problems caused by these habits, such as open bites, we recommend that parents encourage their child to stop by age 4. Habits are often associated with the time of the day, such as during nighttime, with or without a soothing cofactor, such as a favourite blanket. Identifying when this occurs for your child can help with breaking the habit.

For older children with persisting finger sucking or tongue habits, orthodontic appliances may be used as a reminder for them to break the habit. Once the habit
is eliminated, open bites can be spontaneously corrected or improved with time. The doctors at STO Orthodontists will determine if an appliance is suitable for your child.

There are numerous methods for the non-surgical treatment of open bites in adults, depending on the complexity of the presenting bite. This can vary from as simple as having traditional braces
or clear aligners (Invisalign®) with rubber bands to more complex methods involving extractions or temporary miniature implants.

Much like the anchors of a ship, the temporary miniature implants are used as anchors to pull in the molars of the upper jaw. This creates room for the lower jaw
to close down to reduce the open bite. Another method for correction of open bites is extraction of teeth, including molars or premolars. The movement of teeth during the resulting space closure also helps to bring the upper and lower teeth closer together. The treatment methodology selected will be determined on an individual basis between you and your doctors at STO Orthodontists.

This 14-year-old male patient came to our clinic for orthodontic treatment to fix his large overbite and protrusive front teeth. The patient declined future jaw surgery for his underdeveloped lower jaw. His treatment involved extraction of 2 upper second molars and the use of the Crossbow® appliance. This appliance allowed us to move back his upper teeth to reduce the protrusion while simultaneously correctly the overbite by promoting his lower teeth to move more forward. The treatment was completed in 30 months with complete correction of the overbite and protrusion.

This 12-year-old female patient came to our clinic for orthodontic treatment seeking correction for her large overbite. The primary cause of this was her underdeveloped lower jaw. However, the patient’s family declined to have future jaw surgery. Her alternative treatment plan involved extraction of upper second molars and the use of temporary implant devices to correct the bite. The treatment was completed in 23 months with complete correction of the overbite and protrusion. The patient is currently in retention for guidance of the eruption of her lower 2nd molars.

The cause of open bites may due to various different factors, such as:

What are some ways we can treat overbites without jaw surgery?

The two main categories of treatment of overbites without jaw surgery are:

1) Growth modification for children during pre-pubertal growth spurt or 2) Orthodontic camouflage for adults or adolescents with little or no growth potential
remaining.

Growth modification is a method of treatment aimed to influence and improve the direction of growth of the upper and lower jaws toward a more favourable outcome. 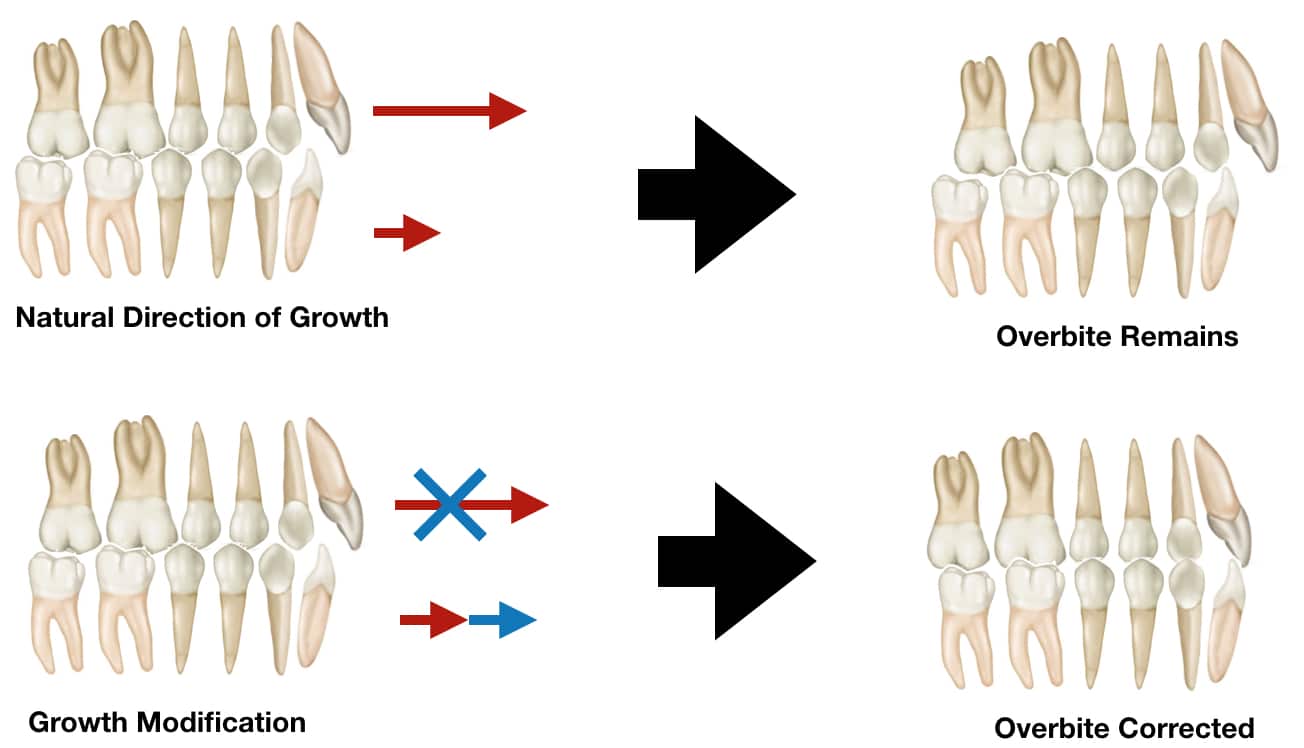 At STO Orthodontists, our team of doctors will periodically monitor your child’s growth pattern to see if or when growth modification may be suitable. This effect
is achieved by using various fixed or removable appliances determined on individual basis at the consultation appointment. Current research indicates that the best time for stable growth modification is during the pubertal growth spurt, which occurs most frequently during the ages of 12-15.

In adults or adolescents with little growth potential remaining, overbites may be camouflaged without surgery if the severity of the jaw discrepancy is of mild to moderate in nature. This is achieved through a combination of moving the upper teeth back and/or the lower teeth forward to reduce the gap between them. The treatment may involve usage of elastics, extractions and/or temporary implants. The end goal is to create a harmonious smile that is reflective of what already exists in nature. 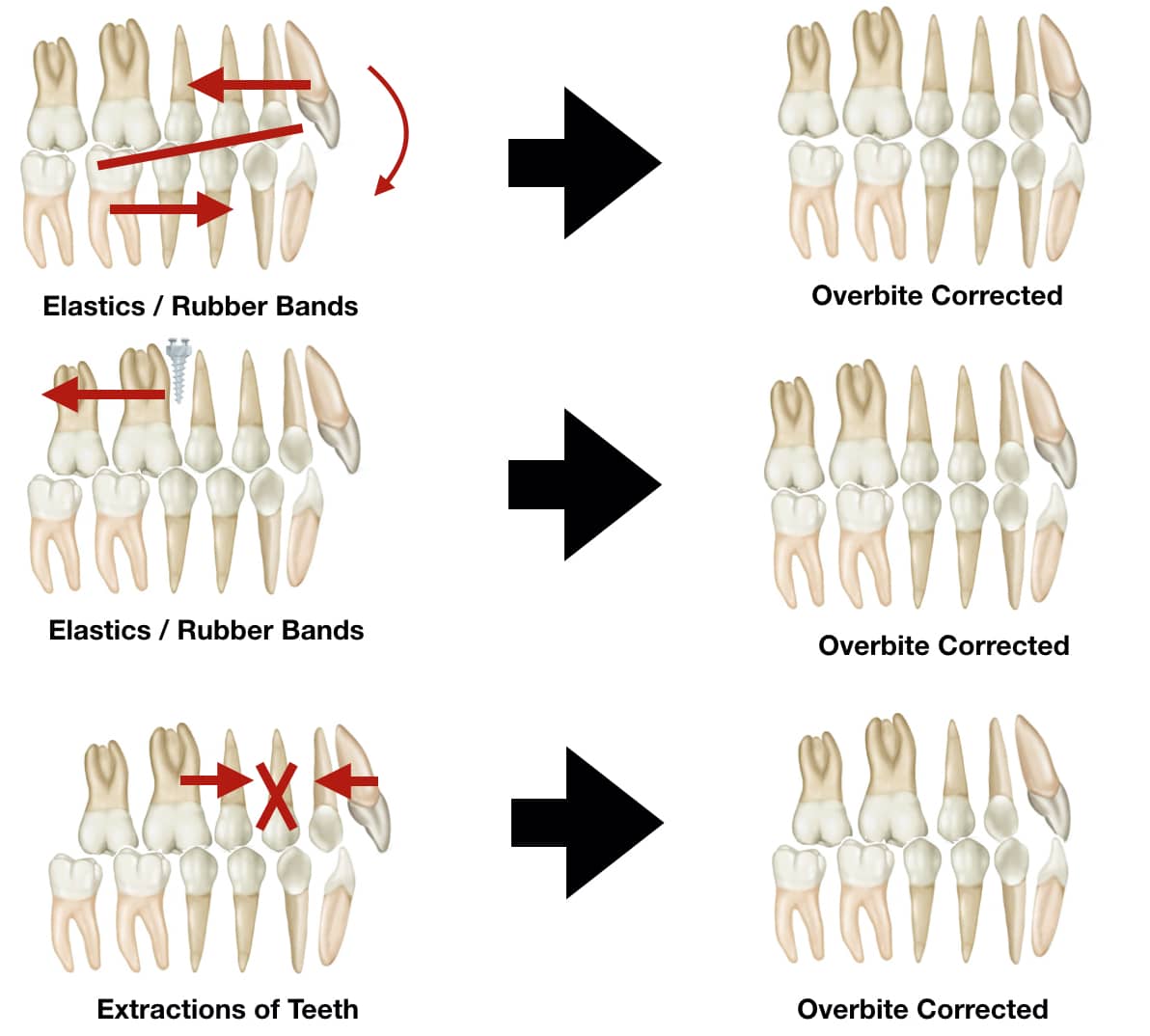